Breaking the Monolith:Essays, Articles, and Columns on Islam, India, Terror and Other Things that Annoy Me 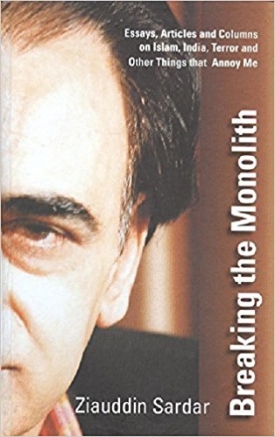 Ziauddin Sardar is one of the world’s leading Muslim intellectuals and author of more than forty books on science, religion, and contemporary culture. Breaking the Monolith, a collection of his essays and articles published in western journals, involves issues of terrorism and representation, the arrogance of American power, the dumbing power of mass culture, and of monolithic thought, in all its guises, from East and West. And, inevitably, they deal with the loss of innocence, with Islam and South Asia, and the collective failure of imagination.

Part One, The Sphere of Islam sets the parameters. We cannot ignore a brutal fact, Sardar says: “In the war on terror that shrouds the globe, the terrorists are Muslims which give credence to that oft-repeated cliché, ‘all Muslims are not terrorists, but all terrorists happen to be Muslims.’” What is the picture of Islam in the common mind? “The spectre of al-Qaeda, its savagery and declared intentions to world domination; Taliban and their barbarity; suicide bombers fighting ‘a jihad’; the mad Mullah hell-bent on seizing power and using all means to justify his ends; colonels and generals legitimizing their illegitimate political authority to create an Islamic state.” The picture that emerges is a creed knee-deep in obscurantism and terrorism, decay and darkness, with violence and extremism as its hallmarks.

Why has Islam passed its “sell-by” date, Sardar asks? “Because it has been kept ‘refrigerated’ for too long. And I say this as a believer! It seems to me that believers have become empty vessels who accept anything that is poured into them by religious scholars in the name of Islam, without question and without criticism.” If Islam is out of sync with the contemporary world, America rides roughshod because of its brutal power, reinforced by neoliberal novelists and writers who see American free liberalism as the best of all possible worlds.

The world is now too complex, too interconnected, too globalised to be divided into ‘black’ and ‘white’: ‘the abode of Islam’ and ‘the abode of unbelief.’ The overall message is break the monolith wherever it comes from.

The A to Z of Postmodern Life: Essays on Global Culture in the Noughties