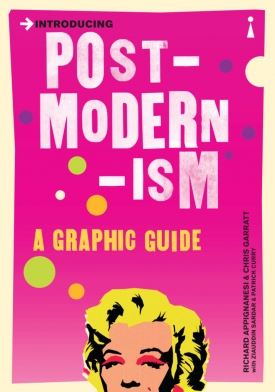 What is postmodernism? As we enter the 21st century, here is a graphic guide to the maddeningly enigmatic concept used to define our cultural condition.

Postmodernism claims that “modernity”, which grew from the Enlightenment, the Industrial Revolution and Marxism, has collapsed. We now live in an endlessly “contemporary” culture full of contested meanings, parody, pastiche and cultural cross-over. This is a virtual world of “hyperreality” containing such strange phenomena as post-Holocaust amnesia, Disneyland, cyberspace and Fukuyama’s proclaimed “end of history”.

Introducing Postmodernism, written by Richard Appignanesi and illustrated by Chris Garratt, traces the pedigrees of postmodernism in art, theory and history, and takes us on a roller-coaster ride through structuralism, semiotics and deconstruction in the company of postmodern icons such as Foucault, Lévi-Strauss, Barthes, Derrida, Lacan and Lyotard. It is a crucial guide for anyone fascinated or exasperated by the hall of mirrors that is postmodernism.