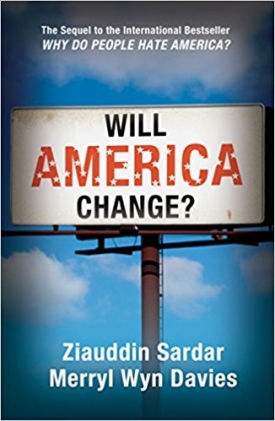 Ziauddin Sardar and Merryl Wyn Davies’ Why Do People Hate America? was published in July 2002 and soon became a word-of-mouth bestseller. In John Pilger’s words, that book ‘carefully documents the impact America, culturally and as an aggressive yet insular force, has on all our lives’.

Will America Change? brings the story right up to date. This book shows how the world’s lone hyperpower developed its doctrine of pre-emptive response that led to the disasters of Afghanistan and Iraq. It explores how, from Vietnam to the end of the Cold War to Iraq, the US has embraced militarism and used its power to make the world secure for American interests. Each year, the problem of America has become more acute, more invasive and more resented around the world.

America, the authors argue, needs to recognise what it has become – not only a military behemoth but a pervasive, pernicious cultural force for homogenisation and denial of local differences around the globe.

With a new president, will America seek real change or more of the same? Are the country’s ills fundamental to America’s idea of itself – or merely skin-deep? Might it be possible that America can help to make the world a safer place?